Comedy did not appear out of nowhere.

There were greats that came and changed the landscape forever.

If you would like to learn more about them, we welcome you to read the page below.

Thank you for your service!

Florida Comedy Guide
A Tribute To 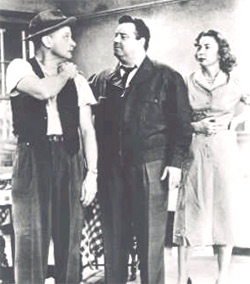 The Florida Comedy Guide proudly pays tribute to the "Great One". Born in 1916, no one could know at the time what an effect John Herbert Gleason would have on the comedic world. Best known for his classic character 'Ralph Kramden' on The Honeymooners, Jackie actually had a much more diverse career than many current audiences know.

Winning an amateur night contest at the Halsey Theater in Brooklyn at the ripe old age of 15, he quickly was hired as the emcee of the theater. Performing regularly in nightclubs, Jackie was "discovered" while performing at Club 18 in New York by Jack Warner himself. Mr. Warner (yes, of Warner Brothers) signed him to a contract that had him leave New York for Hollywood. He made nine films in 1941-1942 in his first stint in Hollywood, sometimes appearing as 'Jackie C. Gleason'.

Returning to Broadway, he appeared in several plays including Artists and Models and Follow the Girls. He made his television debut on Ed Sullivan's Toast of the Town. After that, he was Chester A. Riley on the short-lived series The Life of Riley.

Shortly after the death of The Life of Riley, Jackie hosted the Cavalcade of Stars, which was an immediate hit. While part of that show, the character of Ralph Kramden was created. In just a few years time history would be made with his CBS contract for The Honeymooners in 1955. 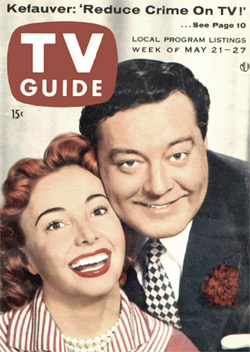 Together with Art Carney and Audrey Meadows, Jackie Gleason produced just one season of The Honeymooners under his CBS contract providing shows that still resound with audiences today. Even more remarkable is that the one season contained 39 episodes. That is far more than current series provide per season showing just how prolific the team was. The characters would continue to be revisited in the years following.

Jackie began to receive critical acclaim as well. He was nominated for an Academy Award for his work on The Hustler, and won a Tony Award for Take Me Along.

In 1985, "Lost Episodes" of The Honeymooners were released exposing a new generation to "The Great One".

Jackie had strong ties to Florida, having moved to Miami in the 60's so that he could play golf daily. Florida still has strong ties to him, with one of the premier theaters in South Florida bearing his name.

On June 30, 1988, the Fifth Avenue Bus Depot in Brooklyn, New York was renamed "The Jackie Gleason Depot". After having played a bus driver for so many years as Ralph Kramden, now a whole bevy of bus drivers pay tribute to him daily when they go to work.

Though his characters were always funny, it was Jackie Gleason who always got us to laugh.

He was loved by millions and will not soon be forgotten.

Comedy in Florida: "How Sweet It Is!"

Florida Comedy Guide
A Tribute To

The Florida Comedy Guide proudly pays tribute to someone who never made the American lexicon, yet spent years entertaining people unheralded. He made many comedic and dramatic appearances through the years in memorable movies and TV shows, yet was always the guy next to the star. But without his presence and efforts, the pictures he was in would not have been the same.

Born in 1909 as Raymond Silverstein, Sid spent the early part of his career as so many others had: in the Catskills. An inspiration act to many of us in the comedy industry, he spent time in WWII traveling into combat zones to entertain the troupes...even under fire. With a lot of time spent on radio, he developed a talent for voices and characters.

In the late 40's and 50's, Sid was featured in animated cartoons. He became the voice of Katnip and did various voices for secondary characters for the popular Popeye series. These appearances have been overshadowed over the years by the continued popularity of his extrememly successful characters, Baby Huey and of course, Heckle and Jeckle.

As you know, we have also paid tribute to Jackie Gleason. Sid worked with "The Great One" on The Honeymooners when he appeared as Mr. Bartfeld in the episode "The Babysitter". He also had many other ensemble appearances in various dramatic and comedic TV series. These continued his constant work as a character actor.

His film appearances have had him seen by most audiences, though few would be able to identify him. He has appeared with many top stars including appearances in the Hustler and the Prize (though uncredited) with Paul Newman, Pajama Game with Liza Minnelli, Hot Stuff with Dom DeLuise and Ossie Davis, Let It Ride with Richard Dreyfuss, Folks with Tom Selleck and Don Ameche, My Father the Hero with Gerard Depardieu and Katherine Heigl, Making Mr. Right with John Malkovich, and Big Trouble with Tim Allen and Rene Russo. 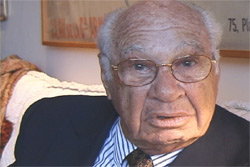 A 27-minute documentary about Sid Raymond, "Sid at 90," was produced in 2002 by Howard Weinberg. The show premiered at the Lincoln Center in New York as part of the 12th Annual New York Jewish Film Festival in January of 2003. The show featured Sid and discussed his life and career. If you have an interest in Sid Raymond, you should definitely check out this video. Information on the documentary is available on the Howard Weinberg website at www.howardweinberg.net.

Never one to not work, Sid was constantly looking for his next performance. Over the last few years of his life, he was continually going on auditions. This resulted in his leaving a lasting impression on the next generation of audiences by appearing on the extremely popular show The O.C. as Stu in the episode "The Return of the Nana."

On the day he passed away, his agent called him at his home in Aventura about a commercial audition. An actor to the end.

Sid was married for 69 years to Dorothy. He is survived by Dorothy, his daughters Margo and Cynthia, and has two sisters and a granddaughter.

Though he will always be remembered for the characters he played, it is the man we pay tribute for because he made us laugh. His work was loved by millions and will not soon be forgotten.